The first challenge is just finding the time to take images. However understanding your partner is, at some point there will be a conflict between your desire to take photos and your responsibilities as a parent and partner.  When the kids want to be driven to the beach, it is not a good time to suggest you instead hike up a mountain in 40 degrees heat, to get that panorama shot. In the end you just have to fit the photography in those small irregular gaps in the holiday schedule, which is not very conducive to carefully crafted images .

The second issue are holiday location themselves. For example this year we went to Dubrovnik in Croatia. The Dubrovnik old city is a wonderful old medieval town on the azure Adriatic coast and should be a photography dream. However its beauty and accessibility also means you will be joined by thousands of other tourists, all jostling to try and do exactly what you want to do.

In Dubrovnik this has been exacerbated recently by being one of the filming locations for something called game of thrones, which apparently is not a Croatian game show, but some fantasy TV series.  Seriously though, I think at least 50% of the visitors were more excited by visiting the set of fictional kingdom, than the actual history that they were walking through. 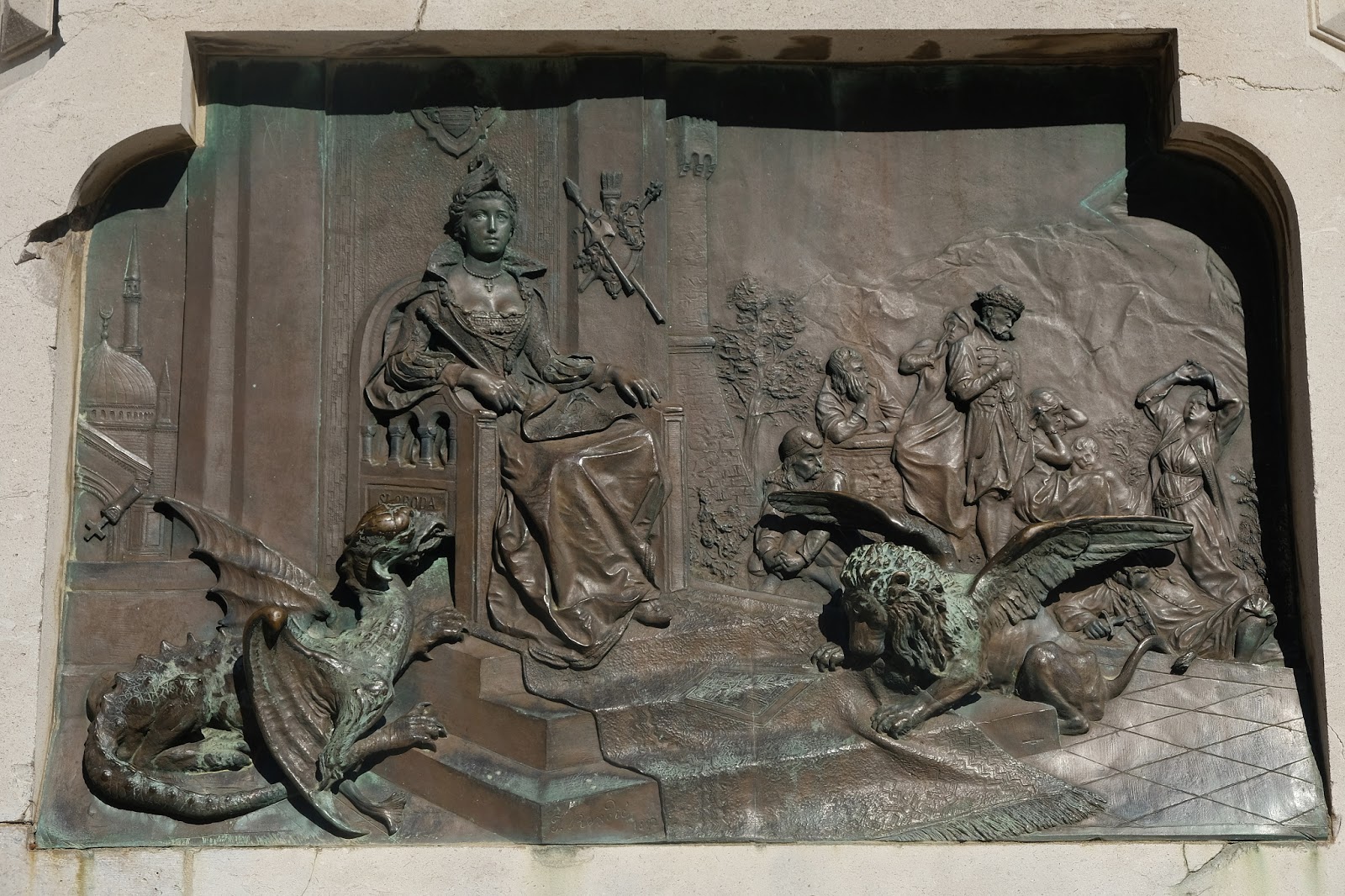 One of the original Game of Thrones story boards

The problem is that old town Dubrovnik is not a big place. It is about the size of a large village, and you can easily cover it in about 2 hours. Add the thousands of visitors all armed to the teeth with cameras, and pretty well every angle of Dubrovnik has been photographed to death at some point.

This is fine if all you want is a memory of your visit, but if you are trying to to create some unique viewpoint or an image that stands out from the crowd…. well good luck with that. (As lovely as Dubrovnik is, it can be a difficult place to get a photo, due to the fact there seems little control over what is put on the outside of buildings. Perhaps understandable considering the heat there was a plethora of air conditioning units, which are as ugly as sin and it is difficult to avoid in any image. If I ever do a book on Dubrovnik, it will be called Cats, Swifts and air conditioning units)

Not sure all residents are as enthused with Dubrovnik’s new popularity.

Then you have to contend with the tourists themselves. Put a large number of people in a small area, all trying to achieve the same thing and you will get conflicts. Basically everyone is jostling trying to get that iconic shot (which will all look the same) and sometimes they almost came to blows as people tried to get a clear shot of some film backdrop.  Basically unless you are very lucky your shot will have tourists in them, and unless you want to spend months photo-shopping them out, you just have to accept this.

To get around this and after getting special dispensation from my wife (who said “fine, just don’t wake me up”), I went into the town at 6 a.m, which was the earliest bus I could get. I thought that I could take some shots before the madding crowd arrived, only to find that this was the time when deliveries were made across the town meaning people were replaced by vans and lorries delivering essential supplies of bottled water and lager (Same thing? – Ed). Of course I could of gone in at 3 a.m. and got some nighttime shots, but a) After previous bad experiences I hadn’t taken a tripod and b) I was reliant on public transport who for some reason decided that catering for lone photographers was not a big part of their business plan. 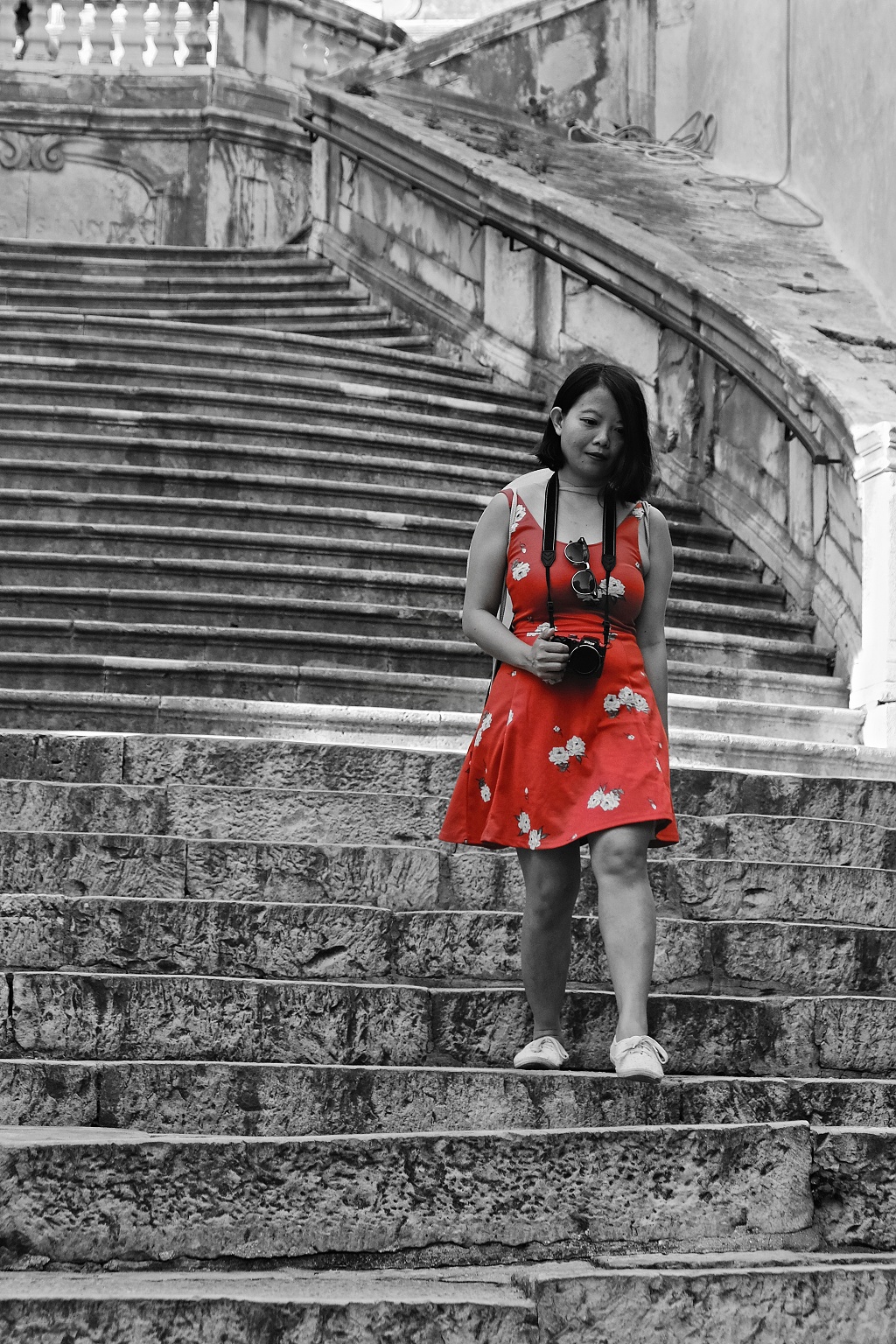 Apparently this was in Game Of Thrones (The stairs, not the dress)

One solution would be what I call the Chinese system, because it seemed common among a number of people from the far east. Basically you get a women to dress up in some white or colorful dress and then spend the entire day going around the town to take shots taken of them posing in front of various landmarks, like they are creating a new great leap forward poster. However the women in my life seem far less compliant, and when I suggested it to them, all I got was sardonic laughter.

The biggest issue however is that pace of trying to cover an area in 7 days is that you get very little time to emphasize with a place. In a perfect world I would like to spend 3 or 4 days trying to get a feel of a place and create a narrative in my head on what the  location meant to me and how I would best express it. Paul Sanders in a talk said that he sometimes spends days in a location waiting for  it to talk to him. Which is nice, but on holiday I am lucky if I have 10 minutes. I am sure there are some people who can arrive in a new destination and instantly take a great photo, however for us mere mortals time is required to create some sort of emotional connection with a place.

In truth by the 3rd day, I was getting a bit frustrated. I had taken loads of images, all of them pretty boring and obvious and I could just not see how I was going to capture the place. For a break I visited the rather wonderful war photography exhibition. It was while I was looking at the thought provoking and harrowing images there that I realised what  I was doing wrong and a solution for those times when your photography is just not going to plan. 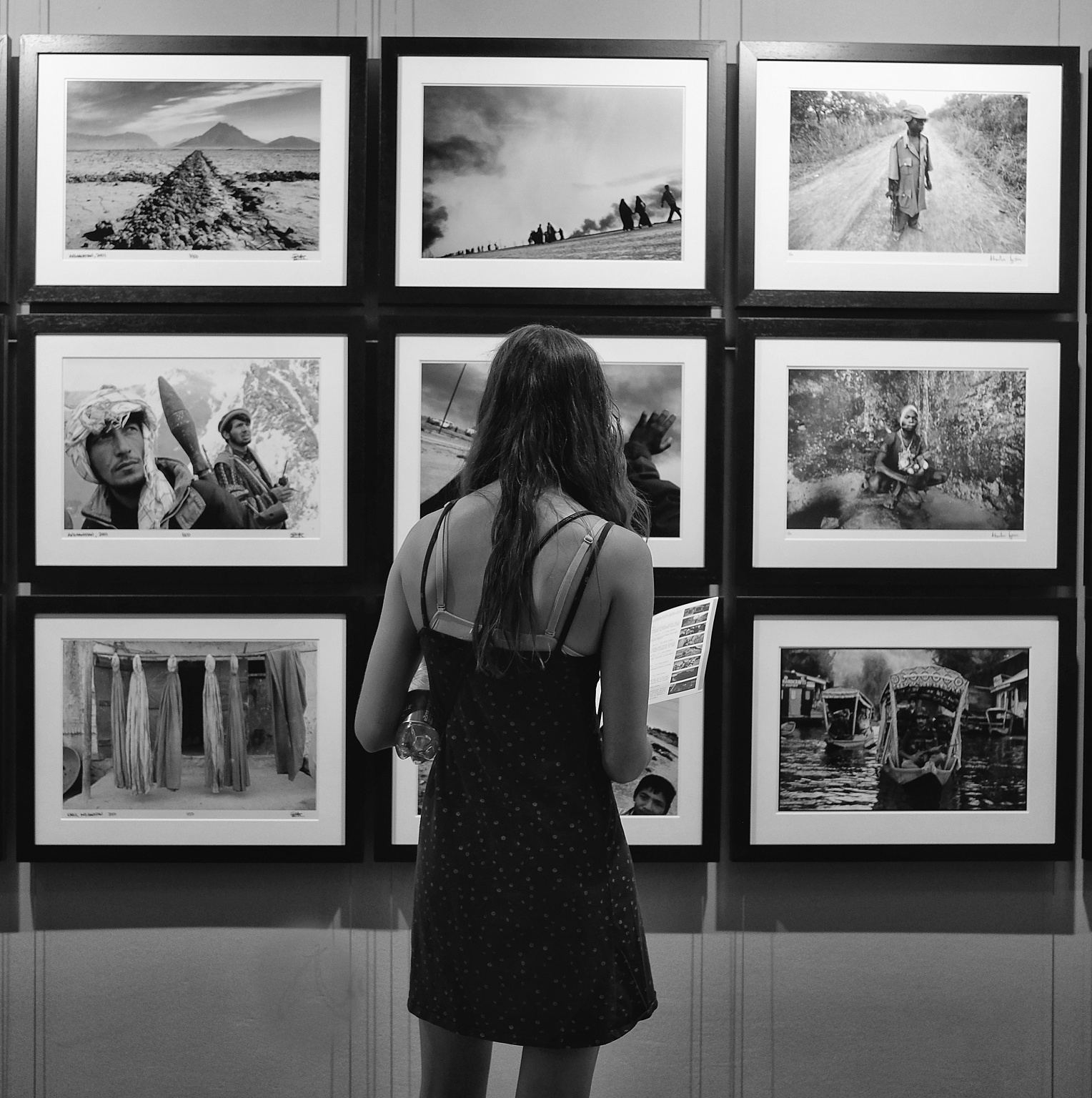 I loved the juxtaposition between the normality of the girl and the images she was viewing. 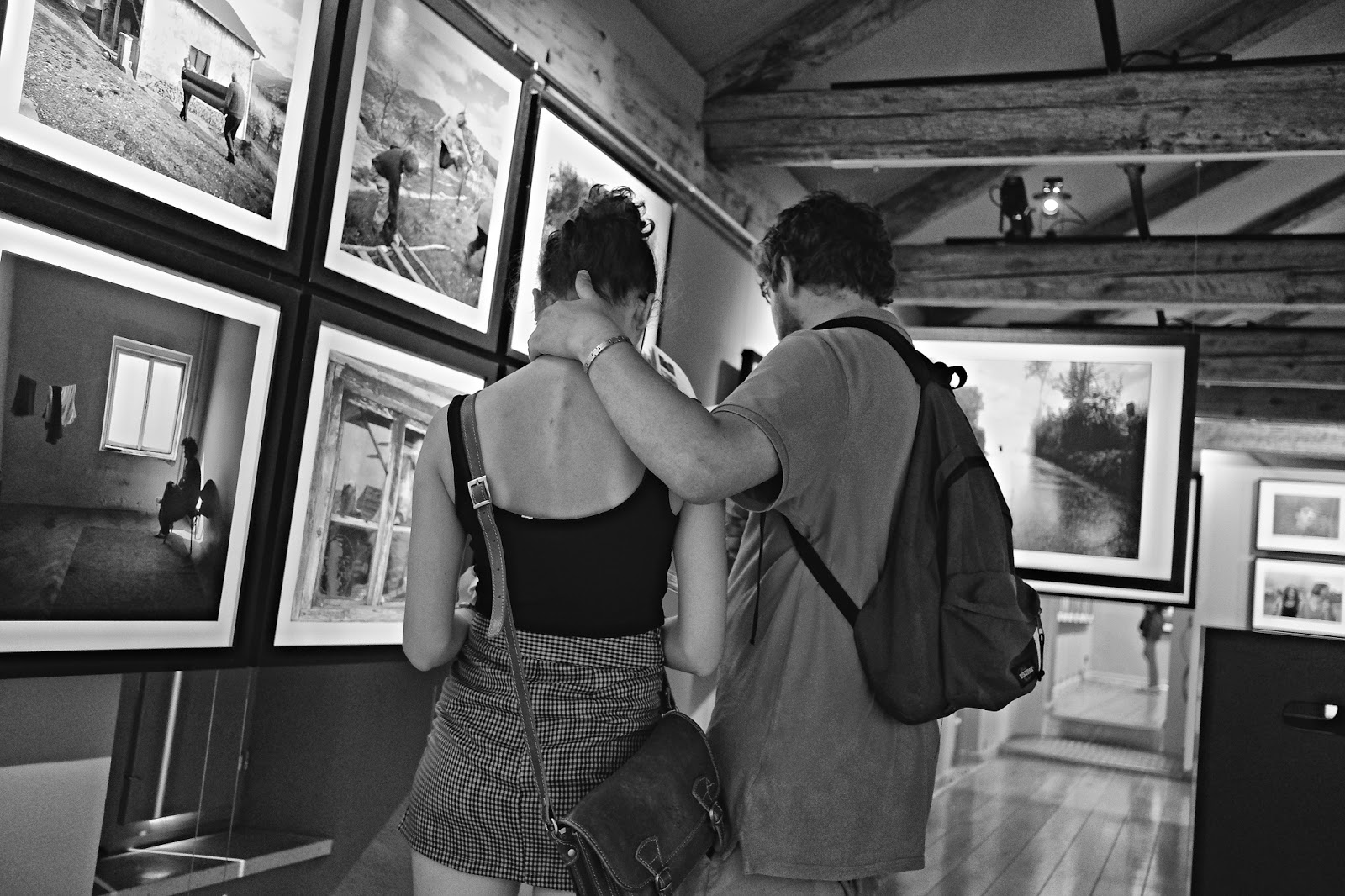 Jū      “Gentle, soft, supple, flexible, pliable, or yielding”.
Jutsu   “The art of manipulating your opponent’s force against themselves.”

The martial art of Jujutsu was designed to allow someone to overcome a stronger opponent by using their strength against themselves.

It comes into play on the days where as a photographer you feel overwhelmed by forces outside your control, be it weather, time pressures or people and often you feel you want to give up. This is where Jujutsu photography may offer you solution by using the very forces against you for your benefit.

As an example on how it works when  I was in Dubrovnik, I was frustrated because I could my images felt obvious and fellow tourists kept getting in may way.

The answer? Instead of railing against the fact there are too many tourists, make the photograph and narrative about the very problem which is hindering you. In short take photos of tourists and how they affect and interact with places like Dubrovnik (in hindsight I was probably unconsciously influenced by the work of Martin Parr who has been doing this sort of thing for years).

So I stopped concentrating on the town, and instead starting to photograph the people. 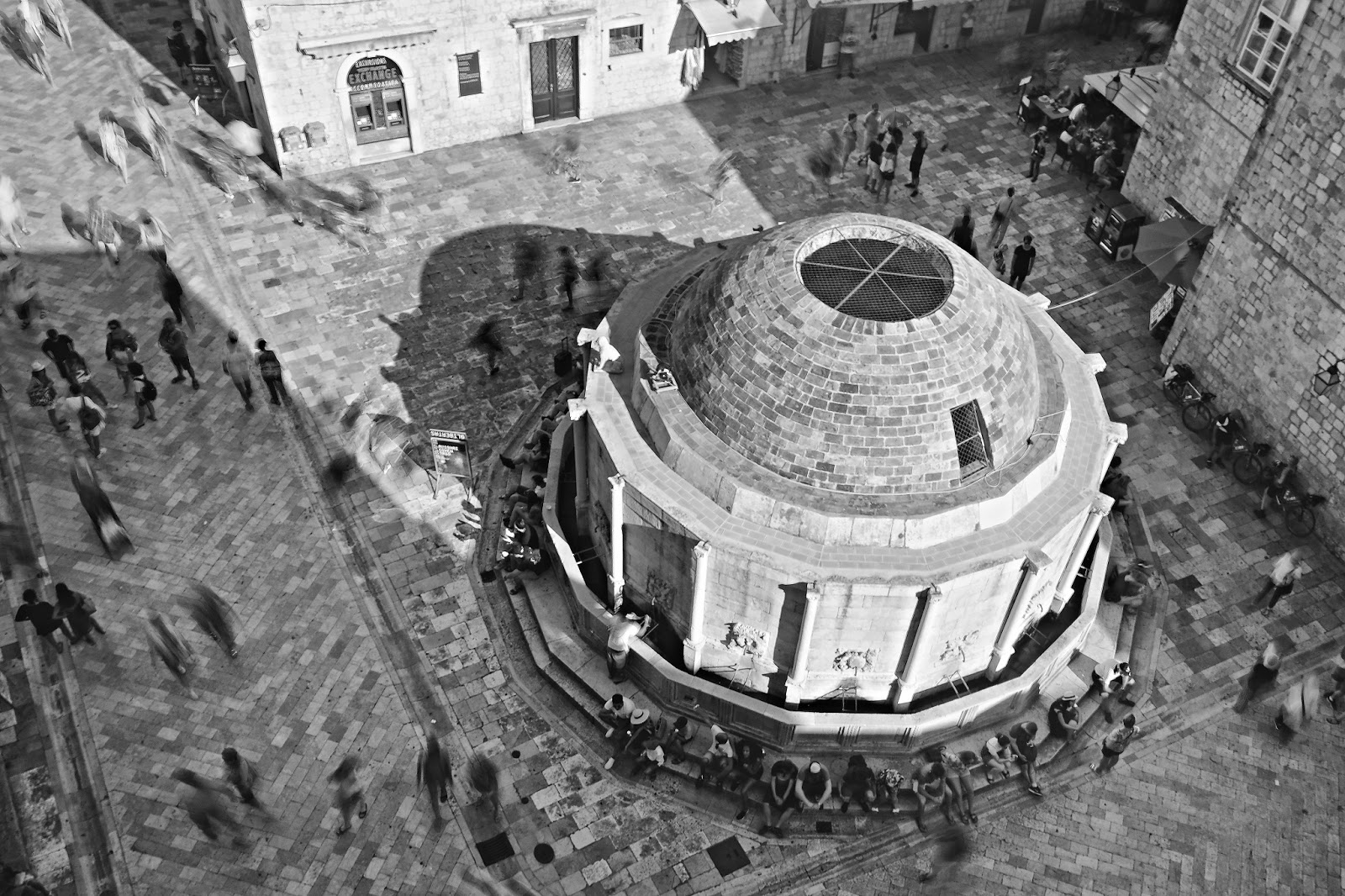 This did mean stepping out our comfort zone because I have always found street photography difficult. In a place like Dubrovnik however it was relatively easy, because most people are distracted so are not aware of you. I put on a 23mm prime on my camera, and just took photos at waist level and went up the main thoroughfare trying to snap tourists.

I am not saying that images I got are great, but to me they tell a far more compelling story than some old church. Also the images are unique and to me provides a very compelling narrative, and far more memorable that just some image of a building. By converting them to black and white we lose city and concentrate on the people, so that the tourists could be any tourist hot spot. 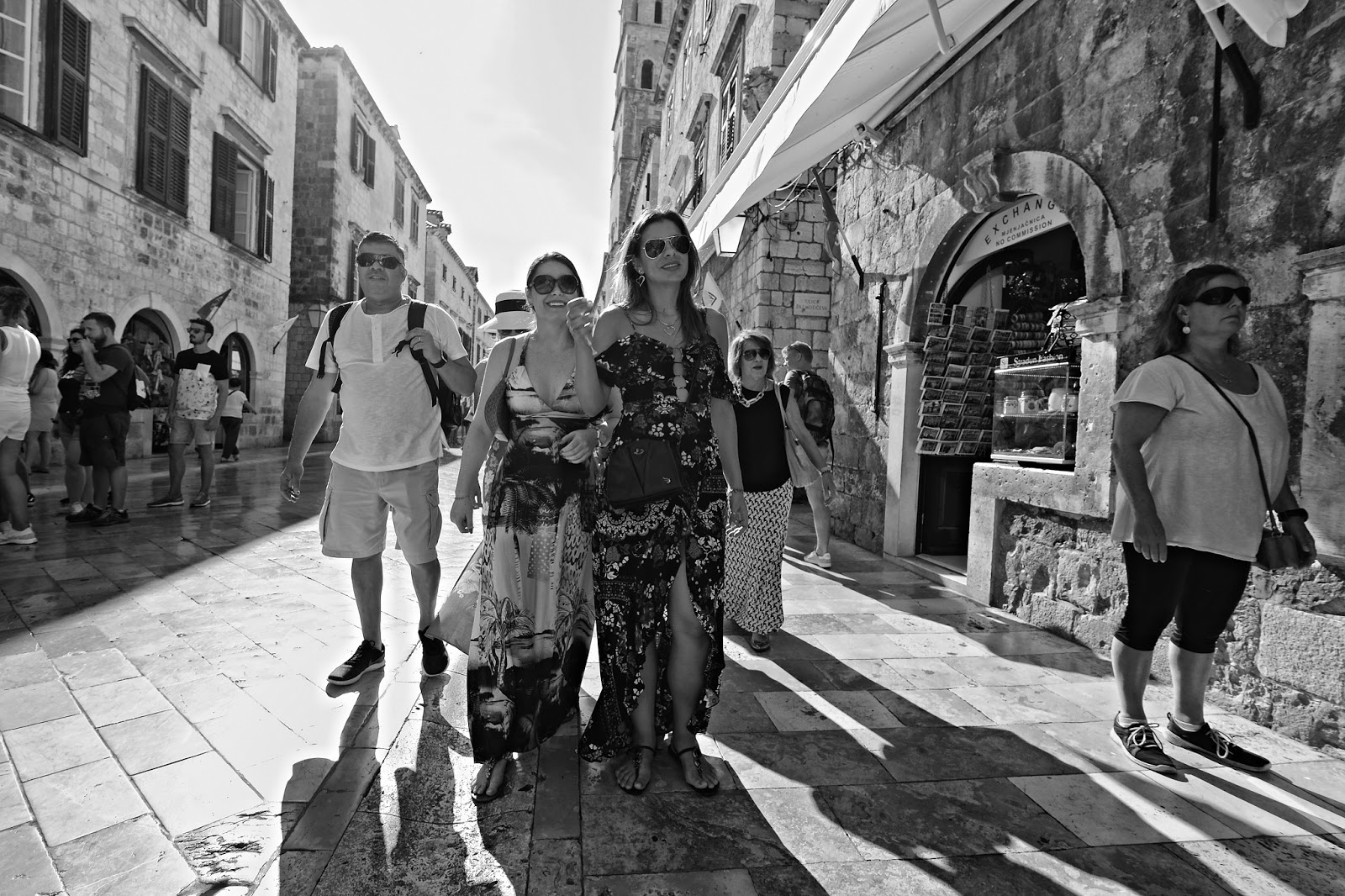 There are many situations where the Jujutsu principle comes in useful.  If the it is raining all day, take macro pictures of the raindrops. If the sun is too bright, photo the shadows. In the end it is about accepting that you cannot control everything and being brave and adaptable enough to do something different  new when your original plan is not working.

In the end of the day, great shots are usually the ones that no one planned, because if they were that obvious, the photo would already of been taken. By not being rigid and bending with the wind rather than fighting the forces against us, as photographers we will be less frustrated and also hopefully get better shots. 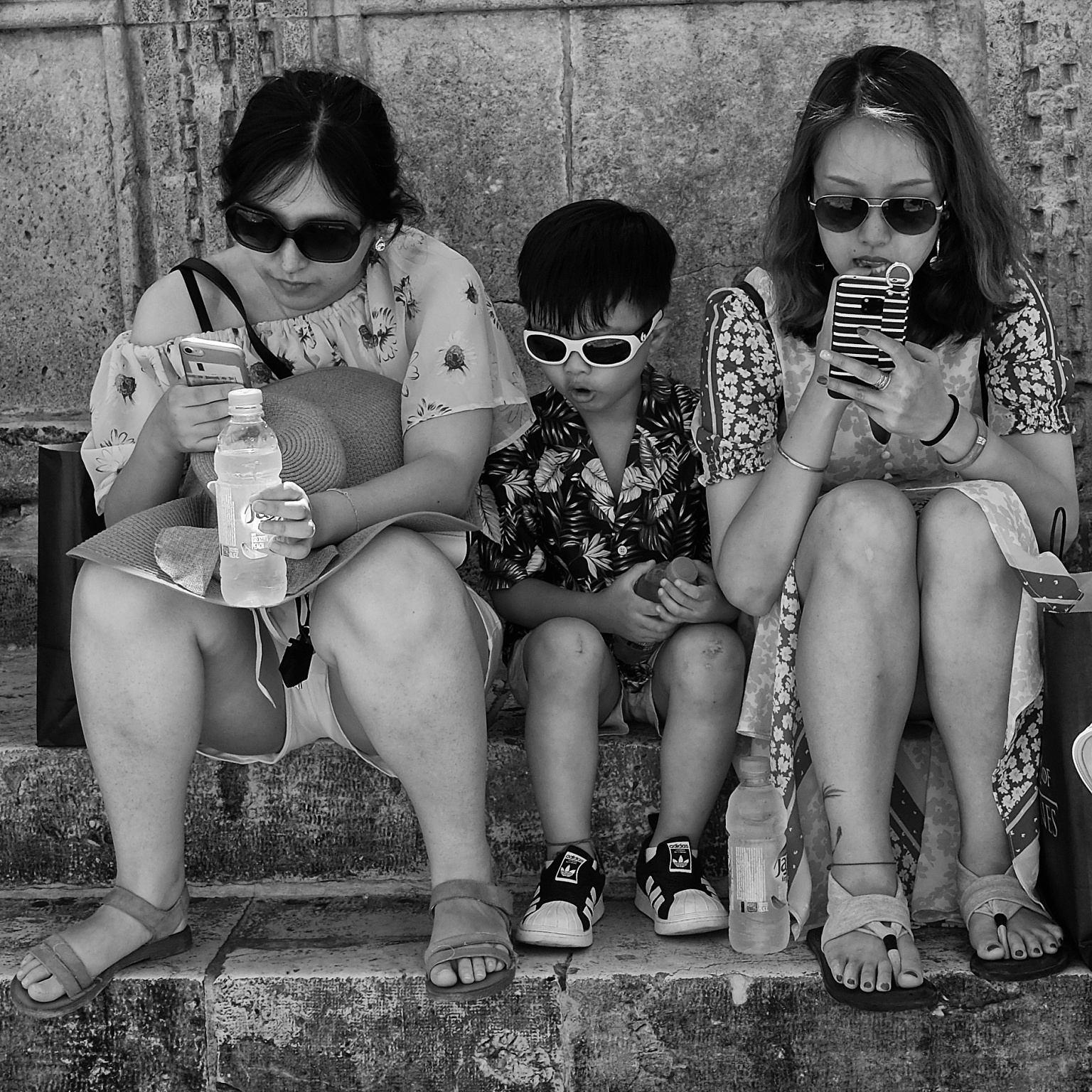 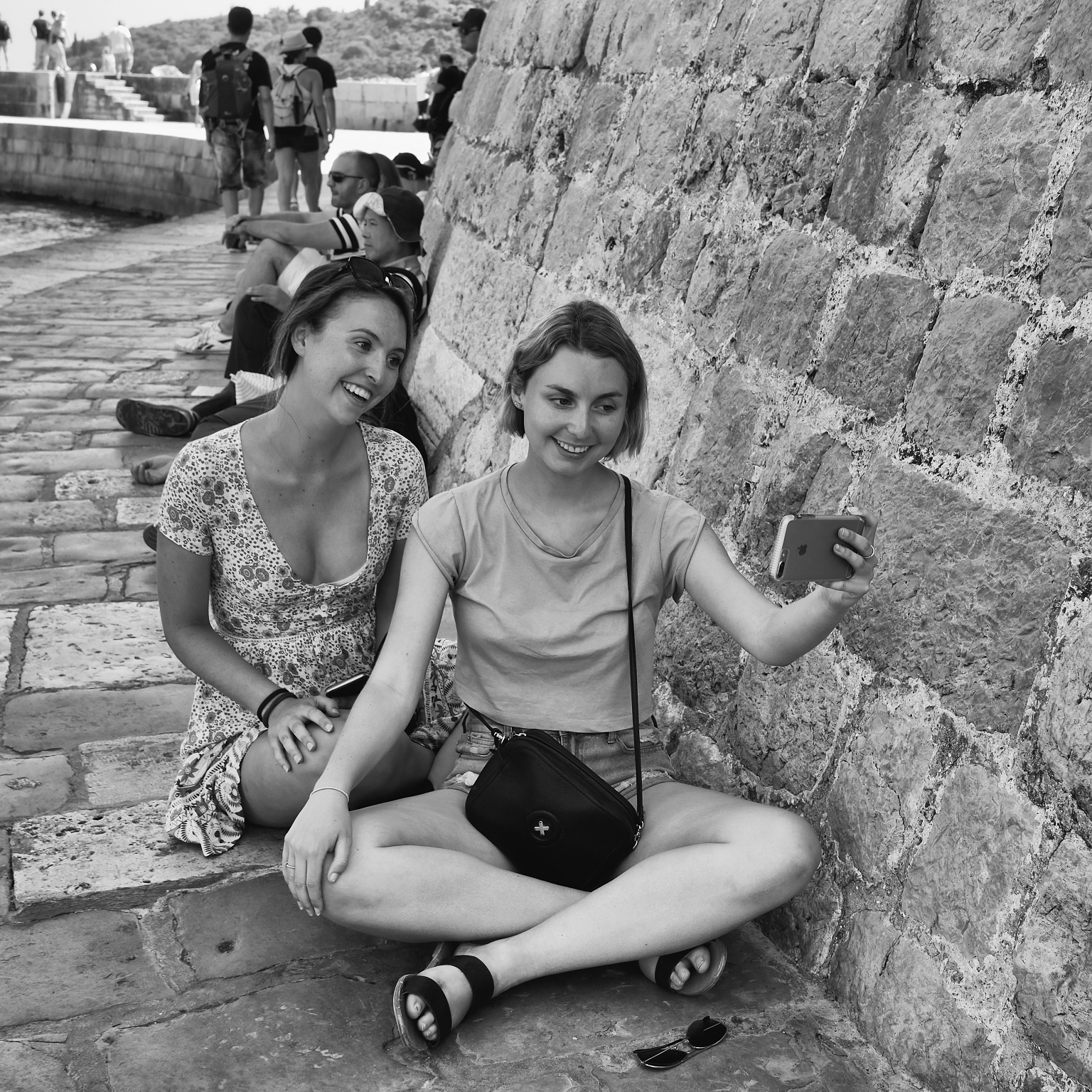 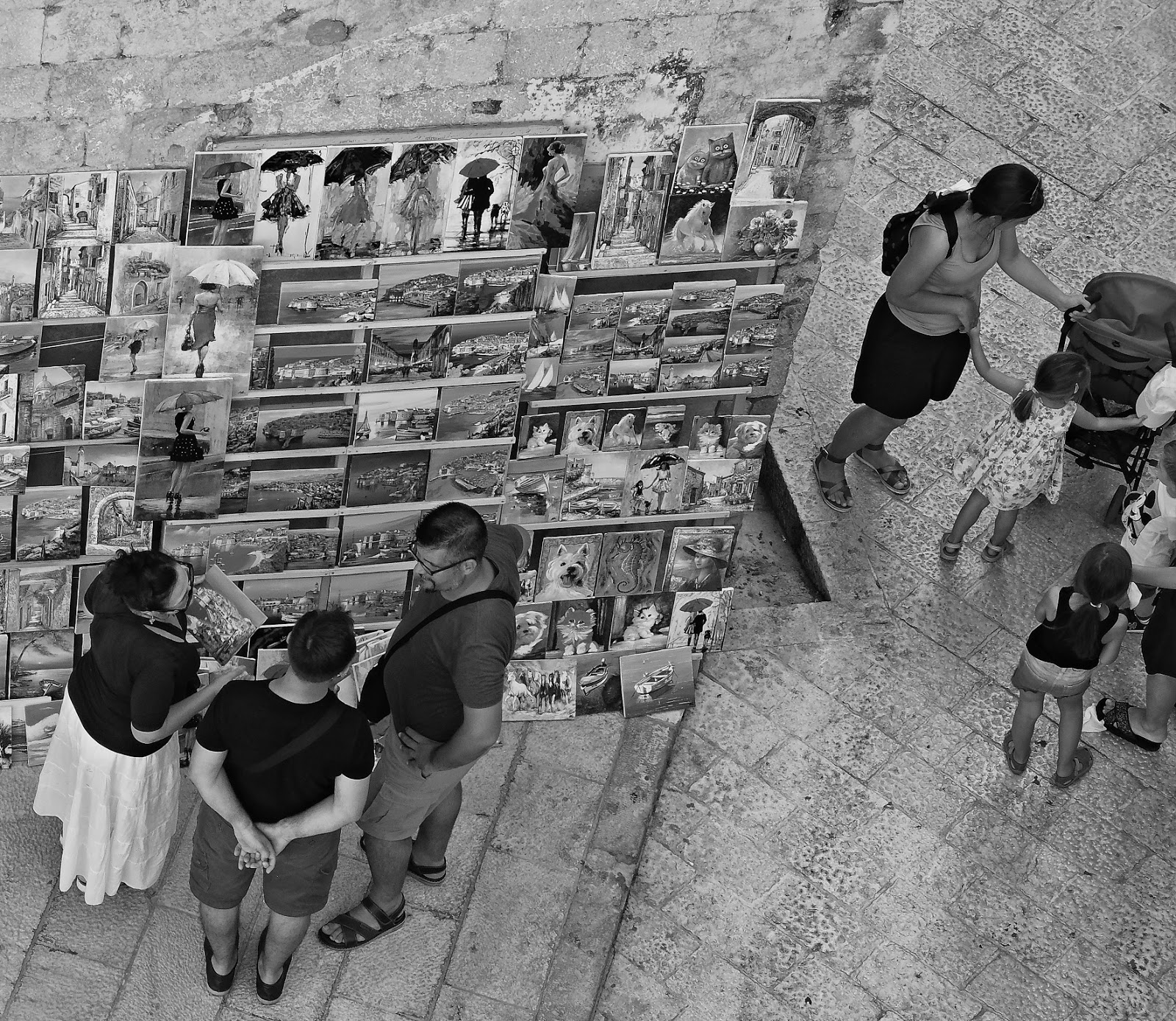 This beautiful kestrel was spotted on the CCTV cameras at Snetterton Circuit, Norfolk earlier this year. Quick thinking Graeme Cameron, who works at the track in race control, was quick enough to spot it "in hunting mode" and zoomed in for a closer look.